The European Space Agency (ESA) launched the Rosetta mission in 2004. After its long journey from Earth, followed by 786 days in orbit around comet 67P / Churyumov–Gerasimenko, the Rosetta spacecraft managers maneuvered the spacecraft out of its orbit and directed it to a “hard” landing on the “head” (the smaller lobe) of the comet. 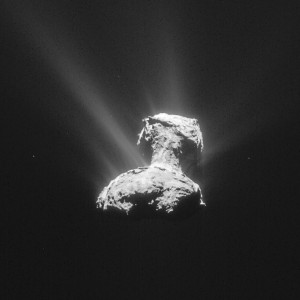 The descent path, which started from an altitude of 19 km (11.8 miles), was designed to bring Rosetta down in the vicinity of active pits that had been observed from higher altitude earlier in the mission. ESA noted:

The spacecraft impacted at a speed of about 90 cm/sec (about 2 mph) at 11:19 AM GMT (4:19 AM PDT) on 30 September 2016. I stayed up in California to watch the ESA’s live stream of the end of this important mission. I have to say that the live stream was not designed as a media event. As the landing approached, only a few close-up photos of the surface were shown, including the following photo taken from an altitude of about 5.7 km (3.5 miles). 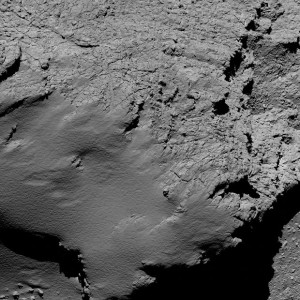 At the appointed moment, touchdown was marked by the loss of the telemetry signal from Rosetta. ESA said that the Rosetta spacecraft contained a message in many languages for some future visitor to 67P to find.

You can read the ESA’s press release on the end of the Rosetta mission at the following link:

Some of the key Rosetta mission findings reported by ESA include:

Analysis of data from the Rosetta mission will continue for several years. It will be interesting to see how our understanding of comet 67P and similar comets evolve in the years ahead.

For more information on the Rosetta mission, visit the ESA’s Rosetta website at the following link:

In my 24 August 2016 post, “Exploring Microgravity Worlds,” I described the European Space Agency’s (ESA’s) Rosetta mission to comet 67P and the Philae lander, which was intended to make a soft landing on 67P and attach itself to the surface. However, the securing devices (a pair of harpoons and screws on each leg) failed to work upon touching the surface the first time. In the microgravity environment of 67P, Philae rebounded and eventually came to rest adjacent to a rocky outcropping seen in a post-landing photo. 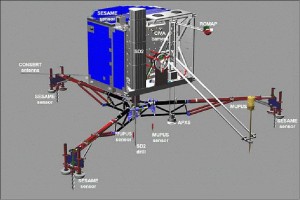 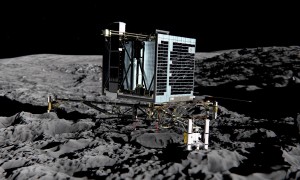 Philae as it was intended to look after landing. Source: MEDIALAB/AFP/Getty Images 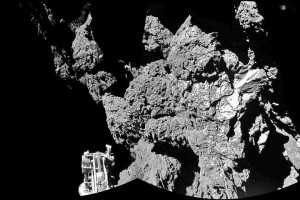 On 2 September 2016, the ESA team managing the Rosetta mission found Philae in photographs taken from the Rosetta spacecraft at an altitude of about 2.7 km (1.7 miles) above the surface of 67P. The photos show that Philae, which is about the size of a washing machine, is lying on its side, wedged among large rocks. Knowing Philae’s actual orientation and environment is expected to help ESA reevaluate the data Philae transmitted from its resting place.

Philae is the “poster child” for the hazards of landing on microgravity worlds. 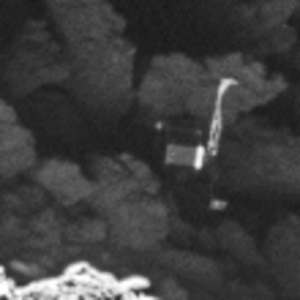 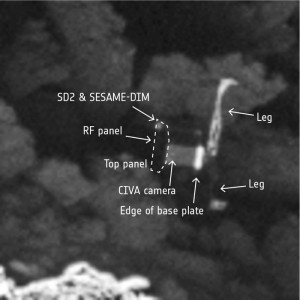 Meanwhile, Rosetta is being maneuvered into ever-closer orbits around 67P, with the goal be taking measurements of the comet’s “atmosphere” very close to the surface. The Rosetta mission is expected to come to an end in September 2016 with the spacecraft colliding with 67P.