This year is the 70th anniversary of the Doomsday Clock, which the Bulletin of the Atomic Scientists describes as follows:

“The Doomsday Clock is a design that warns the public about how close we are to destroying our world with dangerous technologies of our own making. It is a metaphor, a reminder of the perils we must address if we are to survive on the planet.”

You’ll find an overview on the Doomsday Clock here:

The Clock was last changed in 2015 from five to three minutes to midnight. In January 2016, the Doomsday Clock’s minute hand did not change.

On 26 January 2017, the Bulletin of the Atomic Scientists Science and Security Board, in consultation with its Board of Sponsors, which includes 15 Nobel Laureates, decided to reset the Doomsday Clock to 2-1/2 minutes to midnight. This is the closest it has been to midnight in 64 years, since the early days of above ground nuclear device testing.

The Science and Security Board warned:

“In 2017, we find the danger to be even greater (than in 2015 and 2016), the need for action more urgent. It is two and a half minutes to midnight, the Clock is ticking, global danger looms. Wise public officials should act immediately, guiding humanity away from the brink. If they do not, wise citizens must step forward and lead the way.”

You can read the Science and Security Board’s complete statement at the following link:

Their rationale for resetting the clock is not based on a single issue, but rather, the aggregate effects of the following issues, as described in their statement:

The clear need for climate action

Prior to the formal decision on the 2017 setting of the Doomsday Clock, the Bulletin took a poll to determine public sentiment on what the setting should be. Here are the results of this public pole.

How would you have voted?

On 26 January 2016, The Bulletin of the Atomic Scientists Science and Security Board announced that the minute hand of its Doomsday Clock will remain at three minutes to midnight in spite of recent progress with the Iran nuclear agreement and the United Nations Climate Change Conference in Paris (COP 21).

The Science and Security Board gave the following rationale:

“Last year, the Science and Security Board moved the Doomsday Clock forward to three minutes to midnight, noting: ‘The probability of global catastrophe is very high, and the actions needed to reduce the risks of disaster must be taken very soon.’ That probability has not been reduced. The Clock ticks. Global danger looms. Wise leaders should act—immediately.”

Also on this website, you will find a detailed chronology of the changes in the Doomsday Clock since its inception in 1947. The following link will take you directly to this timeline:

Another view of the Doomsday Clock timeline is available in Wikipedia at the following link:

Here you will find the following timeline chart and a compact tabulation of the changes over the years.

On 25 January 2016, Stephen Colbert interviewed former Secretary of Defense Donald Rumsfeld, focusing on the Iraq War and the state of knowledge leading up to the decision to go to war. Donald Rumsfeld had previously addressed the state of U.S. intelligence on Iraq in terms of “known knowns” (i.e., things on which we believe we have adequate intelligence), “known unknowns” (i.e., things on which we believe we do not have adequate, or any, intelligence), and “unknown unknowns” (i.e., things we don’t even know we should be concerned about). Stephen Colbert then asked about “unknown knowns”, which he defined as, “things we know, but choose not to let other people know.” The implication was that our leaders in the military and the Executive Branch had important information that they knew had a bearing on the decision to go to war with Iraq, but this information was unknown to other stakeholders in that decision; namely, most members of Congress and the American people. Then the U.S. went to war with Iraq on 20 March 2003. The Doomsday Clock remained at 7 minutes before midnight, even though the U.S. had just saved the world from Saddam Hussein’s weapons of mass destruction.

You can view Stephen Colbert’s interview with Donald Rumsfeld at the following link:

I need to expand on Donald Rumsfeld’s and Stephen Colbert’s categories for the state of U.S. intelligence by adding the following: “unknown, should have known better.” I define this as a serious, but avoidable, blunder known only at the highest levels and withheld from the public.

As an example of an “unknown, should have known better,” I present the “War Scare of 1983”. Remember that? I’d be quite surprised if you were even remotely aware of it when it occurred.

NATO forces conducted regular military exercises intended to improve their ability to execute war plans designed to counter a Soviet invasion of Europe. It now appears that only a few high-ranking people in the West knew that some of the Soviet leadership had misinterpreted NATO exercises conducted in the fall of 1983 as a prelude to an actual attack.

To set the stage, note in the timeline chart above that the Doomsday Clock had been reset from 7 minutes to 4 minutes before midnight in early 1981. This was a time of generally heightened tensions between the U.S. and the Soviet Union. Perhaps as a consequence, the Soviets appear to have overreacted when they shot down Korean Airlines flight 007 in August 1983 after it strayed into Russian airspace near Sakhalin Island in the Russian Far East. Some believe that Soviet air defense forces had mistaken this civilian flight for a USAF RC-135 surveillance aircraft that previously had flown a similar route.

In the fall of 1983, the annual NATO exercise was known as Autumn Forge 83, consisting of at least six exercises. The final exercise, Able Archer 83, was a nuclear command and control exercise intended to simulate an escalating conflict with the Soviet Union leading to the simulated use of nuclear weapons by NATO. Overall, Autumn Forge 83 was a larger exercise than those conducted in previous years and Able Archer 83 was using new nuclear weapons command and control procedures.

In a 21 May 2013 article posted on The National Security Archives website entitled, “The 1983 War Scare: “The Last Paroxysm” of the Cold War Part II”, Nate Jones includes the following diagram from an unclassified 9 September 1983 briefing showing the large scale of the Autumn Forge 83 exercise. 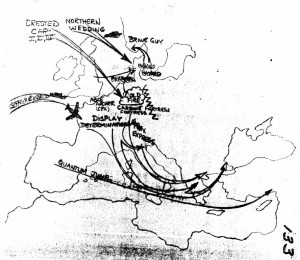 A declassified After Action Report issued by the Strategic Air Command (SAC) Seventh Air Division Headquarters on 1 December 1983 addressed the NATO activities conducted as part of Able Archer 83, but presented no information on Soviet reactions during or following the exercise. This After Action Report is available at the following link:

I first became aware of the significance of Able Archer 83 via John Prados’ article, “The War Scare of 1983,” in The Quarterly Journal of Military History, Spring 1997 (Vol. 9, Issue 3).

In a 2007 article entitled, “A Cold War Conundrum: The 1983 Soviet War Scare,” author Benjamin Fischer attributed the following statement to Oleg Gordievsky, a KGB colonel who defected to the UK in 1985:

“In the tense atmosphere generated by the crises and rhetoric of the past few months, the KGB concluded that American forces had been placed on alert–and might even have begun the countdown to war…. The world did not quite reach the edge of the nuclear abyss during Operation RYAN. But during ABLE ARCHER 83 it had, without realizing it, come frighteningly close–certainly closer than at any time since the Cuban missile crisis of 1962.”

You can read the complete article in the CIA online library at the following link:

A Special National Intelligence Estimate entitled, “Implications of Recent Soviet Military – Political Activities,” dated 18 May 1984 and declassified in 2010, provides insights into the Soviet reactions to Able Archer 83. You can read / download this redacted document at the following link:

A much more readable overview is available in the 21 May 2013 article entitled, “The Able Archer 83 War Scare: ‘NATO requested initial limited use of nuclear weapons,’” by Nate Jones, in which he states that:

“According to a declassified National Security Agency history…. the ‘period 1982-1984 marked the most dangerous Soviet-American confrontation since the Cuban Missile Crisis.’ The secret history recounts that ‘Cold War hysteria reached its peak’ in the autumn of 1983 with a NATO nuclear-release exercise named Able Archer 83, which…. caused ‘Soviet air units in Germany and Poland [to assume] high alert status with readying of nuclear strike forces.’”

You can read the complete article posted on The National Security Archives website at the following link:

On 24 October 2015, David E. Hoffman, writing for The Washington Post, reported that:

“A nuclear weapons command exercise by NATO in November 1983 prompted fear in the leadership of the Soviet Union that the maneuvers were a cover for a nuclear surprise attack by the United States, triggering a series of unparalleled Soviet military responses…”

The Kremlin, uncertain about U.S. intentions, ordered a series of military measures that appeared to be actual preparations for war. A recently declassified 1990 assessment entitled, “The Soviet ‘War Scare,’” by the President’s Foreign Intelligence Advisory Board concluded:

“In 1983, we may have inadvertently placed our relations with the Soviet Union on a hair trigger…”

The Washington Post obtained a copy of this formerly highly classified (Top Secret – Cover Word – Code Word) assessment, which you can read / download (with modest redactions) at the following link:

Obviously, we all survived the War Scare of 1983. Maybe it was better for the public not to know. The Doomsday Clock was adjusted in January 1984 to three minutes before midnight, but not because of Able Archer 83. You can read the rationale for the clock setting on the editorial page in the January 1984 edition of The Bulletin of the Atomic Scientists, which you will find at the following link:

If the Science and Security Board had known the details that have surfaced in the past several years about Able Archer 83, I suspect the clock might have been a tick or two closer to midnight for a brief time.

The Doomsday Clock currently is set at three minutes to midnight.