Following a severe offshore earthquake on 11 March 2011 and subsequent massive tidal waves, the Fukushima Daiichi NPS and surrounding towns were severely damaged by these natural events. The extent of damage to the NPS, primarily from the effects of flooding by the tidal waves, resulted in severe fuel damage in the operating Units 1, 2 and 3, and hydrogen explosions in Units 1, 3 and 4. In response to the release of radioactive material from the NPS, the Japanese government ordered the local population to evacuate. You’ll find more details on the Fukushima Daiichi reactor accidents in my 18 January 2012 Lyncean presentation (Talk #69), which you can access at the following link:

On 1 September 2016, Tokyo Electric Power Company Holdings, Inc. (TEPCO) issued a video update describing the current status of recovery and decommissioning efforts at the Fukushima Daiichi NPS, including several side-by-side views contrasting the immediate post-accident condition of a particular unit with its current condition. Following is one example showing Unit 3. 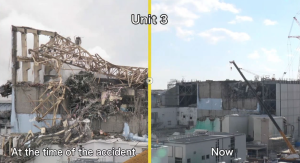 You can watch this TEPCO video at the following link:

An excellent summary article by Will Davis, entitled, “TEPCO Updates on Fukushima Daiichi Conditions (with video),” was posted on 30 September 2016 on the ANS Nuclear Café website at the following link:

This new book presents a comprehensive summary of the March 2011 Fukushima Daiichi nuclear accident from a variety of viewpoints, including technological, organizational, societal, and ethical. 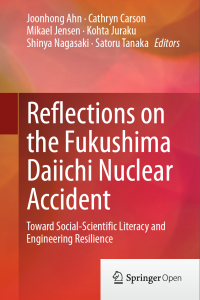 This book is published by Springer Science + Business Media, and you can download a pdf copy this book for free at the following link:

Another recently updated source of information on the Fukushima nuclear accident is the World Nuclear Association’s on-line report at the following link: