It seems that every week or two there is a news article about another small asteroid that soon will pass relatively close to the Earth. Most were detected while they were still approaching Earth. Some were first detected very shortly before or after their closest approach to Earth. That must have made the U.S. Planetary Defense Officer a bit nervous, but then, what could he do about it? (See my 21 January 2016 post, “Relax, the Planetary Defense Officer has the watch”).

While we currently can’t do anything to defend against NEOs, extensive worldwide programs are in place to identify and track NEOs and predict which NEOs may present a future hazard to the Earth. Here’s a brief overview of the following programs.

WISE was an Earth orbiting infrared-wavelength astronomical space telescope with a 40 cm (16 in) diameter primary mirror. WISE operated from December 2009 to February 2011 and performed an “all-sky” astronomical imaging survey in the 3.4, 4.6, 12.0 and 22.0 μm wavelength bands. NASA’s home page for the WISE / NEOWISE mission is at the following link:

NEOWISE is the continuing NASA project to mine the WISE data set. An important data mining tool is the WISE Moving Object Processing System (WMOPS), which has been optimized to enable extraction of moving objects at lower signal-to-noise levels. A comet detection is shown in the following multiple images that have been combined to show the comet in four different positions relative to the fixed background stars. 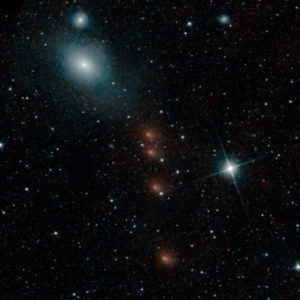 To date, the NEOWISE data mining effort has resulted in the following:

The output from NEOWISE is delivered to NASA’s Planetary Data System (PDS), which NASA describes as follows:

“The PDS archives and distributes scientific data from NASA planetary missions, astronomical observations, and laboratory measurements. The PDS is sponsored by NASA’s Science Mission Directorate. Its purpose is to ensure the long-term usability of NASA data and to stimulate advanced research. All PDS data are publicly available and may be exported outside of United States under ‘Technology and Software Publicly Available’ (TSPA) classification.”

The link to the NASA Planetary Data System is here:

The MPC describes itself as the “single worldwide location for receipt and distribution of positional measurements of minor planets, comets and other irregular natural satellites of the major planets. The MPC is responsible for the identification, designation and orbit computation for all of these objects.”

The MPC home page is here:

On this website, MPC lists the following 2017 summary statistics: 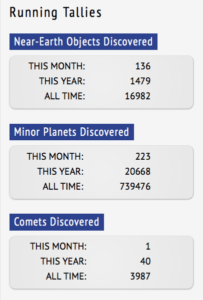 The MPC website offers several short videos that explain the NEO hazard and the challenges of detecting these small objects and determining their orbital parameters with high precision. Key points made in the MPC videos include: 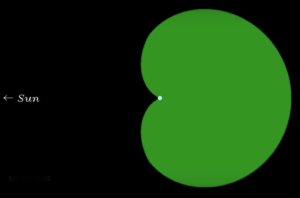 CNEOS is NASA’s center for computing asteroid and comet orbits with high precision and estimating the probability of a future Earth impact. CNEOS is operated by the California Institute of Technology (Caltech) Jet Propulsion Laboratory (JPL) and supports NASA’s Planetary Defense Coordination Office.

The CNEOS home page is here:

CNEOS is the home of JPL’s Sentry and Scout programs:

The average distance between the Earth and the moon is about 238,855 miles (384,400 km), which equals 1 LD. On the CNEOS website, you can view data on NEO close approaches to Earth at the following link:

By adjusting the table settings and sorting by a specific column heading, you can create customized views of the close approach data. Just looking at data from the past year for NEOs that passed Earth within 1 LD yielded the following results:

Looking into the future, the CNEOS close approach data shows two objects that currently have values of “CA Distance Minimum” that are less than the radius of the Earth, indicating that impact is possible:

So it looks like we have less than 30 years to refine the orbital data on object 2012 HG2, determine if it will impact Earth, and, if so, determine where the impact will occur and what mitigating actions can be taken. Hopefully, the U.S. Planetary Defense Officer is on top of this matter.

On 30 August 2017, NOAO issued a press release summarizing the results of a survey of NEOs conducted using the Dark Energy Camera (DECam) on the 4 meter (157.5 inch) Blanco telescope at the Cerro Tololo Inter-American Observatory in northern Chile.

“Lori Allen, Director of the Kitt Peak National Observatory and the lead investigator on the study, explained, ‘There are around 3.5 million NEOs larger than 10 meters, a population ten times smaller than inferred in previous studies. About 90% of these NEOs are in the Chelyabinsk size range of 10-20 meters.’”

You can read the NOAO press release here:

You can read the draft paper, “The size distribution of Near Earth Objects larger than 10 meters,” (to be published in Astronomical Journal) here.

In October 2017, astronomer Vishnu Reddy presented data on an intriguing NEO known as 2016 HO3, that is a “quasi-satellite” of Earth. The announcement is here:

As a “quasi-satellite,” 2016 HO3 is not gravitationally bound to Earth, but its solar orbit keeps 2016 HO3 in relatively close proximity to Earth, but in a slightly different orbital plane. As both bodies orbit the Sun, the motion of 2016 HO3 relative to the Earth gives the appearance that 2016 HO3 is in a distant halo orbit around Earth. The approximate geometry of this three body system is shown in the following diagram, with 2016 HO3’s solar orbit represented in red and the halo orbit as seen from Earth represented in yellow. 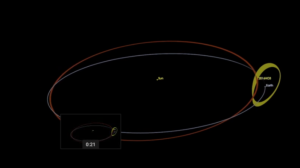 You’ll find a video showing the dynamics of 2016 HO3’s halo orbit on the EarthSky website at the following link:

Observations of 2016 HO3 were made from the Large Binocular Telescope Observatory (LBTO), which is located on Mt. Graham in Arizona. You’ll find details on LBTO at the following link:

Key parameters for 2016 HO3 are: diameter: 100 meters (330 feet); distance from Earth: 38 to 100 LD; composition appears to be the same material as other asteroid NEOs. With its stable halo orbit, there is no risk that 2016 HO3 will collide with Earth.

For additional reading on NEO discovery:

“LSST is designed for rapid, wide-field, faint surveying of the night sky ….The baseline LSST survey approach is designed to make two visits to a given field in a given night, leading to two possible NEO detections per night. These nightly pairs must be linked across nights to derive orbits of moving objects…… Our simulations revealed that in 10 years LSST would catalog 60% of NEOs with absolute magnitude H < 22, which is a proxy for 140 m and larger objects.”