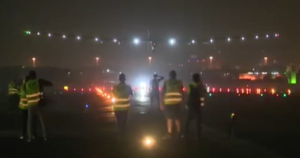 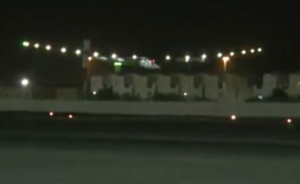 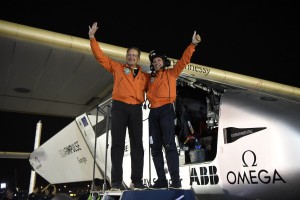 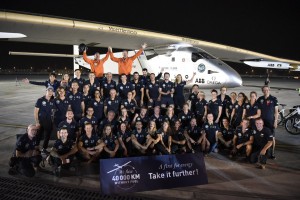 If you have been reading the Pete’s Lynx blog for a while, then you should be familiar with the remarkable team that created the Solar Impulse 2 aircraft and is attempting to make the first flight around the world on solar power.  The planned route is shown in the following map.

I refer you to my following posts for background information:

Picking off where these stories left off in Hawaii, Solar Impulse 2 has made four more flights:

From the above distances and flight times, the average speed of Solar Impulse 2 across the USA was a stately 43.6 mph (70.2 kph).  Except for the arrival in the Bay Area, I think the USA segments of the Solar Impulse 2 mission have been given remarkably little coverage by the mainstream media. 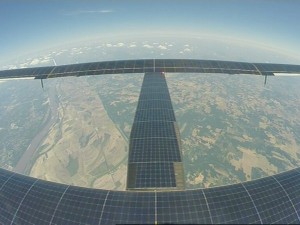 Regarding the selection of Dayton as a destination for Solar Impulse 2, the team posted the following:

“On his way to Dayton, Ohio, hometown of Wilbur and Orville Wright, André Borschberg pays tribute to pioneering spirit, 113 years after the two brothers succeeded in flying the first power-driven aircraft heavier than air.

To develop their wing warping concept, the two inventors used their intuition and observation of nature to think out of the box. They defied current knowledge at a time where all experts said it would be impossible. When in 1903, their achievement marked the beginning of modern aviation; they did not suspect that a century later, two pioneers would follow in their footsteps, rejecting all dogmas to fly an airplane around the world without a drop of fuel.

This flight reunites explorers who defied the impossible to give the world hope, audacious men who believed in their dream enough to make it a reality.” 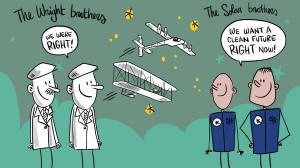 You can see in the above route map that future destinations are not precisely defined. Flight schedules and specific routes are selected with due consideration for en-route weather.

The Solar Impulse 2 team announced that its next flight is scheduled to take off from Dayton on 24 May and make an 18-hour flight to the Lehigh Valley Airport in Pennsylvania. Following that, the next flight is expected to be to an airport near New York City.

If you haven’t been following the flight of Solar Impulse 2 across the USA, I hope you will start now. This is a remarkable aeronautical mission and it is happening right now. You can check out the Solar Impulse website at:

If you wish, you can navigate to and sign up for e-mail updates on future flights. Here’s the direct link:

With these updates, you also will be able to access live video feeds during the flights. OK, the videos are mostly pretty boring, but they are remarkable nonetheless because of the mission you have an opportunity to watch, even briefly, in real time.

There’s much more slow, steady flying to come before Solar Impulse 2 completes its around-the-world journey back to Abu Dhabi. I send my best wishes for a successful mission to the brave pilots, André Borschberg and Bertrand Piccard, and to the entire Solar Impulse 2 team. 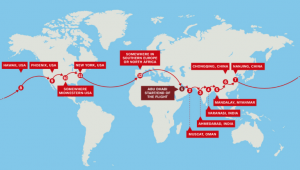 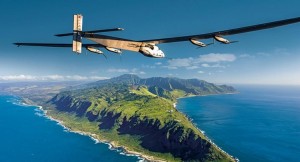 After a 118 hour solo, non-stop, solar-powered flight from Nagoya, Japan, pilot Andre Borschberg landed the Solar Impulse 2 aircraft at Kalaeloa, a small airport outside Honolulu, Hawaii.  During this flight,  Borschberg broke the world records for longest distance and duration for solar aviation, and the world record for the longest solo flight ever.  Solar Impulse 2 remained airborne for 5 consecutive days and nights, producing its own power with solar energy. 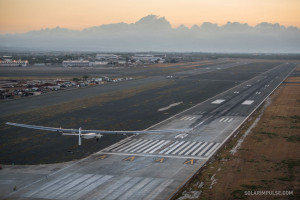 Key parameters of this remarkable, record-breaking flight is listed below:

Each day (solar cycle), Solar Impulse 2 was flown on a trajectory that entailed: (1) using solar power during the day to run the engines, gain altitude, and charge the batteries, and then (2) using batteries to run the engines while gradually gliding down to lower altitudes at night.

This flight was Leg 8 of a planned around-the-world solar-powered journey that began in Abu Dhabi. The preceding seven legs are listed below: 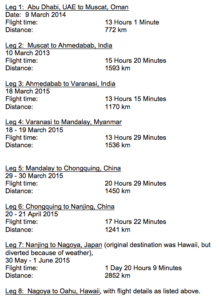 The next planned legs are:

I hope you will follow the remainder of the Solar Impulse team’s efforts to complete this pioneering journey around the world on solar power.

Switzerland’s Solar Impulse 2 (Si2) is designed to fly around the world on solar power. Its wing span of 236 ft. is greater than the wing span of a Boeing 747. The high aspect ratio wing maximizes aerodynamic efficiency. Power is generated by more than 17,000 high-efficiency solar cells, with a daily generation capacity of up to 340 kWh. In comparison, my home solar electric system can generate 22 kWh on a good day.

Built with carbon fiber structures, Si2 weighs only 5,070 lb., but a bit more than 1/4 of that is for the batteries. 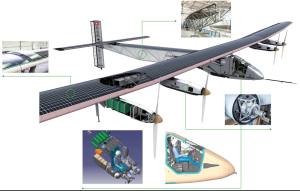 Check out the Solar Impulse 2 website for detailed information on how this remarkable airplane was designed and constructed to meet the challenges of its mission.