The Event Horizon Telescope (EHT) is a huge synthetic array for Very Long Baseline Interferometry (VLBI), which is created through the collaboration of millimeter / submillimeter wave radio telescopes and arrays around the world. The goal of the EHT “is to directly observe the immediate environment of a black hole with angular resolution comparable to the event horizon.”

The primary target for observation is Sagittarius A* (Sgr A*), which is the massive black hole at the center of our Milky Way galaxy. This target is of particular interest to the EHT team because it “presents the largest apparent event horizon size of any black hole candidate in the Universe.” The Sgr A* event horizon is estimated to have a Schwarzschild radius of 12 million kilometers (7.46 million miles) or a diameter of 24 million km (14.9 million miles). The galactic core (and hence Sgr A*) is estimated to be 7.6 to 8.7 kiloparsecs (about 25,000 to 28,000 lightyears, or 1.47 to 1.64e+17 miles) from Earth. At that distance, the Sgr A* black hole subtends an angle of about 2e-5 arcseconds (20 microarcseconds).

Another EHT target of interest is a much more distant black hole in the Messier 87 (M87) galaxy.

The member arrays and telescopes supporting EHT are:

The following arrays and telescopes are expected to join the EHT collaboration:

Collectively, the arrays and telescopes forming the EHT provide a synthetic aperture that is almost equal to the diameter of the Earth (12,742 km, 7,918 miles). 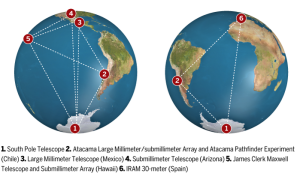 Technical improvements to the member telescopes and arrays are underway with the goal of systematically improving EHT performance. These improvements include development and deployment of:

In operations to date, EHT has been observing the Sgr A* and M87 black holes at 230 GHz (1.3 mm) with only some of the member arrays and telescopes participating. These observations have yielded angular resolutions of better than 60 microarcseconds. Significantly higher angular resolutions, up to about 15 microarcseconds, are expected from the mature EHT operating at higher observing frequencies and with longer baselines.

Coordinating observing time among all of the EHT members is a challenge, since participation in EHT is not a dedicated mission for any site. Site-specific weather also is a factor, since water in the atmosphere absorbs radiation in the EHT observing frequency bands. The next observing opportunity is scheduled between 5 – 14 April 2017. Processing the data from this observing run will take time, hence results are not expected to be known until later this year.

For more information on EHT, see the 2 March 2017 article by Daniel Clery entitled, ”This global telescope may finally see the event horizon of our galaxy’s giant black hole,” at the following link:

Much more information is available on the EHT website at the following link:

An article on the Las Cumbres Observatory (LCO) website explains how the angular resolution of radio telescopes, including VLBI arrays, is determined. In this article, the author, D. Stuart Lowe, states that “an array of radio telescopes of 217 km in diameter can produce an image with a resolution equivalent to the Hubble Space Telescope.” You’ll find this article here:

The Hubble Space Telescope has an angular resolution of 1/10th of an arcsecond (1e-1 arcsecond).

EHT should be capable of meeting its goal of angular resolution comparable to a black hole’s event horizon.

X-ray observation of Sgr A*

Combining infrared images from the Hubble Space Telescope with images the Chandra X-ray Observatory, NASA created the following composite image showing the galactic core in the vicinity of Sgr A*. NASA reports:

“The large image contains X-rays from Chandra in blue and infrared emission from the Hubble Space Telescope in red and yellow. The inset shows a close-up view of Sgr A* in X-rays only, covering a region half a light year wide. The diffuse X-ray emission is from hot gas captured by the black hole and being pulled inwards.”

This image gives you a perspective on the resolution of Sgr A* possible at X-ray frequencies with current equipment. EHT will have much higher resolution in its radio frequency bands. 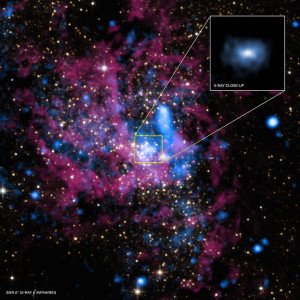 More details on this image are available at the following NASA link:

Animation of Sgr A* effects on nearby stars

See my 24 January 2017 post, “The Black Hole at our Galactic Center is Revealed Through Animations,” for more information on how teams of astronomers are developing a better understanding of the unseen Sgr A* black hole through long-term observations of the relative motions of nearby stars that are under the influence of this black hole.  These observations have been captured in a very interesting animation.