On 14 September 2015, the U.S. Laser Interferometer Gravitational-Wave Observatory (LIGO) became the first observatory to detect gravitational waves. With two separate detector sites (Livingston, Louisiana, and Hanford, Washington) LIGO was able to define an area of space from which the gravitational waves, dubbed GW150914, are likely to have originated, but was not able to pinpoint the source of the waves. See my 11 February 2016 post, “NSF and LIGO Team Announce First Detection of Gravitational Waves,” for a summary of this milestone event.

You’ll find a good overview on the design and operation of LIGO and similar laser interferometer gravity wave detectors in the short (9:06) Veratisium video, “The Absurdity of Detecting Gravitational Waves,” at the following link:

The LIGO team reports that the Advanced LIGO detector is optimized for “a range of frequencies from 30 Hz to several kHz, which covers the frequencies of gravitational waves emitted during the late inspiral, merger, and ringdown of stellar-mass binary black holes.”

The LIGO team defines O1 as starting on 12 September 2015 and ending on 19 January 2016. During that period, the LIGO team reported that it had, “unambiguously identified two signals, GW150914 and GW151226, with a significance of greater than 5σ,” and also identified a third possible signal, LVT151012. The following figure shows the time evolution of the respective gravitational wave signals from when they enter the LIGO detectors’ sensitive band at 30 Hz. 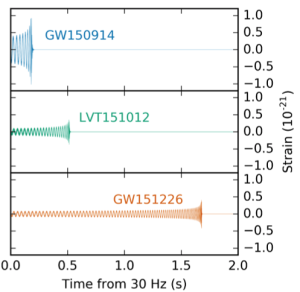 The second detection of gravitational waves, GW151226, occurred on 26 December 2015. You’ll find the 16 June 2016 LIGO press release for this event at the following link:

At the following link, you can view a video showing a simulation of GW151226, starting at a frequency of 35 Hz and continuing through the last 55 gravitational-wave cycles before the binary black holes merge: 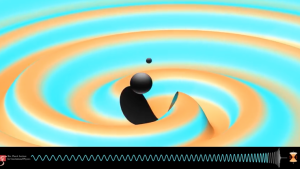 In their GW151226 press release, the LIGO team goes out on a limb and makes the following estimate:

“….we can now start to estimate the rate of black hole coalescences in the Universe based not on theory, but on real observations. Of course with just a few signals, our estimate has big uncertainties, but our best right now is somewhere between 9 and 240 binary black hole coalescences per cubic Gigaparsec per year, or about one every 10 years in a volume a trillion times the volume of the Milky Way galaxy!”

More details on the GW151226 detection are available in the paper “GW151266: Observation of Gravitational Waves from a 22-Solar Mass Black Hole Coalescence,” at the following link:

LIGO releases its data to the public. Analyses of the LIGO public data already are yielding puzzling results. In December 2016, researchers reported finding “echoes” in the gravitational wave signals detected by LIGO. If further analysis indicates that the “echoes” are real, they may indicate a breakdown of Einstein’s general theory of relativity at or near the “edge” of a black hole. You can read Zeeya Marali’s 9 December 2016 article, “LIGO black hole echoes hint at general relativity breakdown,” at the following link:

Following a 10-month period when they were off-line for modifications, the Advanced LIGO detectors returned to operation on 30 November 2016 with a 10% improvement in the sensitivity of their interferometers. The LIGO team intends to further improve this sensitivity by a factor of two during the next few years.

In my 16 December 2015 post, “100th Anniversary of Einstein’s General Theory of Relativity and the Advent of a New Generation of Gravity Wave Detectors,” I reported on other international laser interferometer gravitational wave detectors. The LIGO team has established a close collaboration with their peers at the European Gravitational Observatory, which is located near Pisa, Italy. Their upgraded detector, VIRGO, in collaboration with the two LIGO detectors, is expected to provide the capability to triangulate gravitational wave sources. With better location information on the source of gravitational waves, other observatories can be promptly notified to join the search using other types of detectors (i.e., optical, infrared and radio telescopes).

VIRGO is expected to become operational in 2017, but technical problems, primarily with the mirror suspension system, may delay startup. You’ll find a 16 February 2017 article on the current status of VIRGO at the following link:

Lyncean member Dave Groce recommends the excellent video of an interview of Caltech Professor Kip Thorne (one of the founders of LIGO) by “Einstein” biographer Walter Issacson. This 2 November 2016 video provides a great perspective on LIGO’s first detection of gravitational waves and on the development of gravitational wave detection capabilities. You’ll find this long (51:52) but very worthwhile video at the following link:

Dr. Thorne noted that, at the extremely high sensitivity of the Advanced LIGO detectors, we are beginning to see the effects of quantum fluctuations in “human sized objects,” in particular, the 40 kg (88.2 pound) mirrors in the LIGO interferometers. In each mirror, the center of mass (the average position of all the mass in the mirror) fluctuates due to quantum physics at just the level of the Advanced LIGO noise.

In the interview, Dr. Thorne also discusses several new observatories that will be become available in the following decades to expand the spectrum of gravitational waves that can be detected. These are shown in the following diagram. 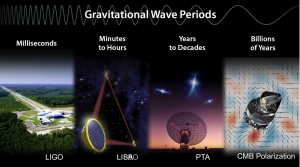 See my 27 September 2016 post, “Space-based Gravity Wave Detection System to be Deployed by ESA,” for additional information on LISA.

Clearly, we’re just at the dawn of gravitational wave detection and analysis. With the advent of new and upgraded gravitational wave observatories during the next decade, there will be tremendous challenges to align theories with real data.   Through this process, we’ll get a much better understanding of our Universe.