The U.S. firm Liquid Robotics, Inc., in Sunnyvale, CA, designs, manufactures, and sells small unmanned surface vehicles (USVs) called Wave Gliders, which consist of two parts: an underwater “glider” that provides propulsion and a surface payload vehicle that houses electronics and a solar-electric power system. The physical arrangement of a Wave Glider is shown in the following diagrams. The payload vehicle is about 10 feet (305 cm) long. The glider is about 7 feet (213 cm) long and is suspended about 26 feet (800 cm) below the payload vehicle. 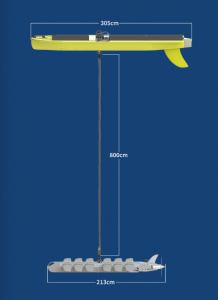 The payload vehicle is topped with solar panels and one or more instrumentation / communication / navigation masts. The interior modular arrangement of a Wave Glider is shown in the following diagram. Wave Glider is intended to be an open, extensible platform that can be readily configured for a wide range of missions. 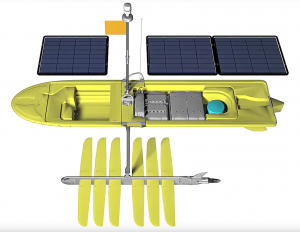 The Wave Glider is propelled by wave power using the operational principle for wave power harvesting shown in the following diagram. Propulsion power is generated regardless of the heading of the Wave Glider relative to the direction of the waves, enabling sustained vehicle speeds of 1 to 3 knots. 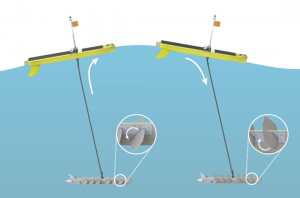 The newer SV3 Wave Glider has a more capable electric power system than its predecessor, the SV2, enabling the SV3 glider to be equipped with an electric motor-driven propeller for supplementary solar-electric propulsion. SV3 also is capable of towing and supplying power to submerged instrument packages.

More information and short videos on the operation of the Wave Glider are available on the Liquid Robotics website at the following link:

On 28 April 2016, the U.S. Navy announced that it was in the process of awarding Liquid Robotics a sole-source contract for Wave Glider USV hardware and related services. You can read the Notice of Intent at the following link:

As described by the Navy:

“The required USV is a hybrid sea-surface USV comprised of a submerged ‘glider’ that is attached via a tether to a surface float. The vehicle is propelled by the conversion of ocean wave energy into forward thrust, independent of wave direction. No electrical power is generated by the propulsion mechanism.”

Navy requirements for the Wave Glider USV include the following:

In my 11 April 2016 post, I discussed how large autonomous surface and underwater vehicles will revolutionize the ways in which the U.S. Navy conducts certain operational missions. Wave Glider is at the opposite end of the autonomous vehicle size range, but retains the capability to conduct long-duration, long-distance missions. It will be interesting to see how the Navy employs this novel autonomous vehicle technology.