The idea of extracting energy from wave motion in the open ocean is not a new one. This energy source is renewable and relatively persistent in comparison to wind and solar power. However, no commercial-scale wave power generator currently is in operation anywhere in the world. The primary issues hindering deployment of this technology are:

In April 2014, Dave Levitan posted an article entitled, “Why Wave Power Has Lagged Far Behind as Energy Source,” on the Environment360 website. You can read this article at the following link:

The general consensus seems to be that the wave energy industry is at about the same level of maturity as the wind and solar energy industries were about 30 years ago, in the 1980s.

Several U.S. firms offer autonomous floating devices that are capable of extracting energy from the motion of ocean waves and generating usable, persistent, renewable electric power. Two of the leaders in this field are Ocean Power Technologies, Inc. (OPT) in Pennington, NJ (with subsidiaries in the UK and Australia) and Northwest Energy Innovations, LLC (NWEI) in Portland, OR. Let’s take a look at their products

OPT (http://www.oceanpowertechnologies.com) is the developer of the PowerBuoy®, which is a moored ocean buoy that extracts energy from the heave (vertical motion) of ocean waves and converts this into electrical energy for marine applications (i.e., offshore oil, gas, scientific and military applications) or for distribution to onshore facilities and/or connection to an onshore electric power grid. OPT currently offers PowerBuoy® in two power output ranges: up to 350 watts and up to 15 kW. 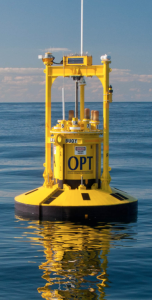 The modest output from individual PowerBuoys® can be combined via an Undersea Substation Pod into a scalable wave farm to deliver significant power output to the intended user. 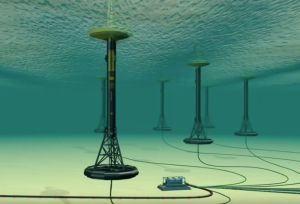 You’ll find a description of PowerBuoy® design and operation on the OPT website at the following link:

OPT describes their PowerBuoy® as follows:

“The PowerBuoy consists of a float, spar, and heave plate as shown in the (following) schematic…… The float moves up and down the spar in response to the motion of the waves. The heave plate maintains the spar in a relatively stationary position. The relative motion of the float with respect to the spar drives a mechanical system contained in the spar that converts the linear motion of the float into a rotary one. The rotary motion drives electrical generators that produce electricity for the payload or for export to nearby marine applications using a submarine electrical cable. This high performance wave energy conversion system generates power even in moderate wave environments.

The PowerBuoy’s power conversion and control systems provide continuous power for these applications under the most challenging marine conditions. The spar contains space for additional battery capacity if required to ensure power is provided to a given application even under extended no wave conditions.” 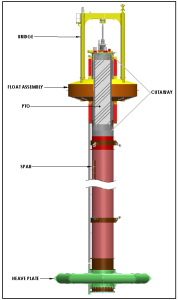 On the OPT website, you’ll find several technical presentations on the PowerBuoy® at the following link: 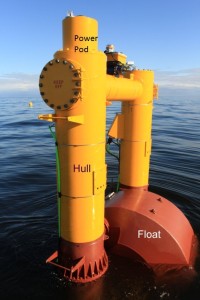 You can see a short video on the operating principle of the Azura™ wave energy device at the following link:

In 2012, the Azura prototype was fabricated and deployed at the Northwest National Marine Renewable Energy Center (NNMREC) ocean test site offshore from Newport, OR. 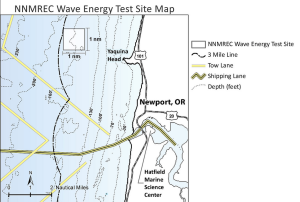 On May 30, 2015, under a Department of Energy (DOE) and U.S. Navy sponsored program, NWEI deployed the improved Azura™ prototype at the Navy’s Wave Energy Test Site at the Marine Corps Base, Kaneohe Bay, Oahu, Hawaii. The Azura prototype extends 12 feet above the surface and 50 feet below the surface. It generates up to 18 kW of electricity. 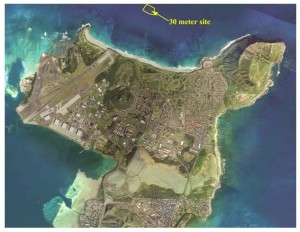 You can view a short video on the Azura being installed at the offshore site in Kaneohe Bay at the following link:

In September 2016, the Azura™ prototype reached a notable milestone when it became the first wave-powered generator connected to a U.S. commercial power grid.

I think we all can all agree that the technology for wave-generated power still is pretty immature. The cost of wave-generated power currently is very high in comparison to most alternatives, including wind and solar power. Nonetheless, there is a lot of energy in ocean waves and the energy density can be higher than wind or solar. As the technology matures, this is an industry worth watching, but you’ll have to be patient.