FAST is being built in a remote region of China, in the southwestern province of Guizhou. Completion is planned for September 2016, at which time FAST will replace the similar 305 meter (1,000 ft) Arecibo Observatory in Puerto Rico as the world’s largest radio telescope. 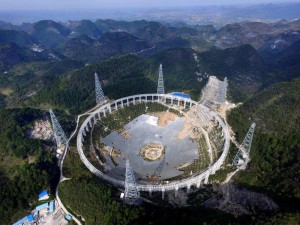 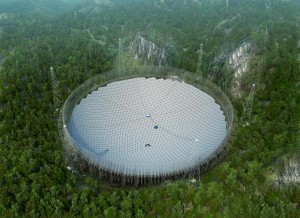 Main features of FAST are:

Observation programs are expected to include the following:

All residents within 3 miles of the new telescope (more than 9,000 people) are being relocated to create an electromagnetic “quiet zone” around the telescope.

You can download a fact sheet on the telescope at the following link:

You can download a more detailed paper entitled, “The Five Hundred Meter Aperture Spherical Telescope (FAST) Project,” which provides details on the telescope design, at the following link:

An English language version of the FAST project website appears not to have been maintained since 2010, but can be accessed at the following link:

The Chinese government announced completion of FAST on 4 July 2016.  The project took roughly five years to complete and cost about $180 million.

FAST Chief Engineer, JIANG Peng, announced that FAST has been open to Chinese astronomers since April 2019. After the National Construction Acceptance in September 2019, it is expected that FAST will be available for use by astronomers from other nations.   You can read more here: