Peter Lobner
The Global Precipitation Measurement (GPM) Core Observatory – an initiative launched in 2014 as a collaboration between NASA and the Japan Aerospace Exploration Agency (JAXA) – acts as the standard to unify precipitation measurements from a network of 12 satellites. The result is NASA’s integrated multi-satellite retrievals for the GPM data product, called IMERG, which combines all of these data from 12 satellites into a single, seamless map.  An example of this global map is shown below: 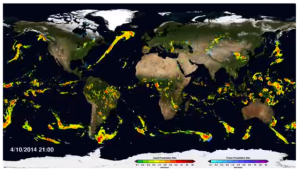 Check out the short article and watch a short video showing the synthesized global precipitation map in action at the following NASA link:

More details on GMP mission can be found at the following NASA website: