The two primary goals of the M3 program are:

More details on the M3 program are presented on the following DARPA website:

In September 2012, the DARPA / Boston Dynamics / MIT Cheetah 4-legged robot, being developed under the M3 program, reached a top speed of over 29 mph in a tethered test on a treadmill, exceeding the fastest speed ever run by a human, Usain Bolt, at 27.78 mph in a 20-meter sprint. You can see a video of this tethered test of the Cheetah at the following link:

In May 2015, the Cheetah demonstrated it’s ability to hurdle obstacles up to 18”tall in both tethered treadmill and untethered indoor track tests while running at an average speed of about 5 mph. 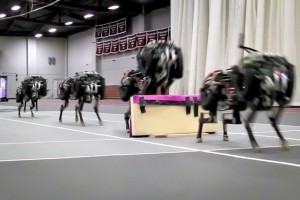 You can read the article and see a video of this test at the following link:

As described in this article:

“To get a running jump, the robot plans out its path, much like a human runner: As it detects an approaching obstacle, it estimates that object’s height and distance. The robot gauges the best position from which to jump, and adjusts its stride to land just short of the obstacle, before exerting enough force to push up and over. Based on the obstacle’s height, the robot then applies a certain amount of force to land safely, before resuming its initial pace.”

You can see more high-mobility robots being developed by Boston Dynamics at the following link: