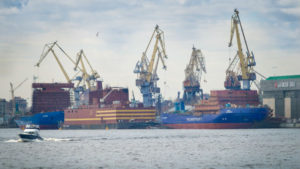 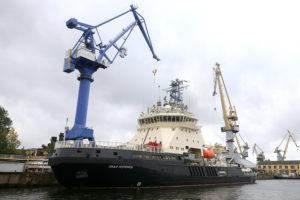 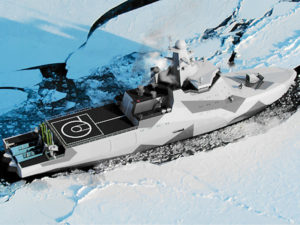 In September 2018, the Coast Guard renamed its New Icebreaker Program ‘Polar Security Cutter.’  The hull designation will be WMSP. W is the standard prefix for Coast Guard vessels, and MSP stands for Maritime Security-Polar.  However, the revised designation does not alter how the vessel is funded.

With the heavy polar icebreaker Polar Star (WAGB-10) used exclusively to support Antarctic operations, the medium-size cutter Healy (WAGB-20) is the only Coast Guard polar icebreaker serving the Arctic region. Healy was built in 2000 primarily as an Arctic research vessel for the national Academy of Sciences.

“HEALY is designed to conduct a wide range of research activities, providing more than 4,200 square feet of scientific laboratory space, numerous electronic sensor systems, oceanographic winches, and accommodations for up to 50 scientists. HEALY is designed to break 4.5 feet of ice continuously at three knots and can operate in temperatures as low as -50 degrees F. The science community provided invaluable input on lab layouts and science capabilities during design and construction of the ship. At a time when scientific interest in the Arctic Ocean basin is intensifying, HEALY substantially enhances the United States Arctic research capability.

As a Coast Guard cutter, HEALY is also a capable platform for supporting other potential missions in the polar regions, including logistics, search and rescue, ship escort, environmental protection, and enforcement of laws and treaties.”