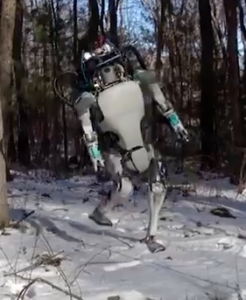 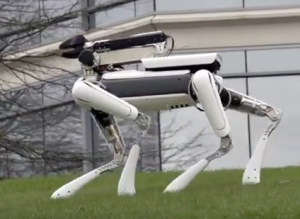 The design of National Aeronautics and Space Administration’s (NASA’s) humanoid robot R5, commonly known as Valkyrie, started in October 2012 and it was unveiled in December 2013. 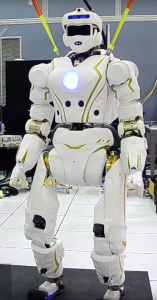 Valkyrie was developed by a team from NASA’s Johnson Space Center (JSC) in Houston, in partnership with the University of Texas and Texas A&M and with funding from the state of Texas to compete in the Defense Advanced Projects Research Agency’s (DARPA) Robotics Challenge (DRC).  You’ll find a technical description of Valkyrie on the IEEE Spectrum website at the following link:

In the 2013 DRC Trials Valkyrie was a Track A entry, but it failed to score any points, largely due to unforeseen data communications problems.  An assessment of the developmental and operational problems encountered during the 2013 DRC Trials and another assessment of Valkyrie by the Florida Institute for Human & Machine Cognition (IHMC) is reported on the IEEE Spectrum website at the following link:

Valkyrie did not compete in the 5 – 6 June 2015 DRC Finals. Instead, NASA brought two Valkyrie robots to the DRC Finals for display and demonstration and to help promote NASA’s Space Robotics Challenge (SRC), which was announced in March 2015.

NASA describes the SRC as follows:

“The Space Robotics Challenge is currently contemplated as a dual level, two-track challenge. The Level I challenge would involve a virtual challenge competition in software simulation and the Level II demonstration challenge would involve use of software to control a robot to perform sequences of tasks. Both Levels of the challenge would have a Track A and Track B option. A competitor would pick only one track in which to compete. Track A would utilize the Robonaut 2 platform and focus on simulated in-space tasks such as spacecraft maintenance and operations in transit to Mars, while Track B would utilize the R5 platform robot to perform simulated tasks on planetary surfaces, such as precursor habitat deployment on Mars, or disaster relief in an industrial setting on Earth.”

The highest scoring teams from the Level I (simulation) challenge will be given access to NASA-provided robots to prepare for the Level II (physical) challenge.

You can download a NASA Fact Sheet on SRC at the following link:

As part of SRC, NASA awarded Valkyrie robots to two university groups that competed in the DRC Finals. The winners announced in November 2015 were:

Each team has possession of a Valkyrie robot for two years; receives up to $250,000; and has access to onsite and virtual technical support from NASA. NASA stated that, “The robots will have walking, balancing and manipulating capabilities so that future research may focus on the development of complex behaviors that would advance autonomy for bipedal humanoid robots.” These two teams will not compete in the SRC Level I challenge, but will be eligible to compete in the Level II challenge.

An assessment of Valkyrie’s potential roles in future missions to Mars was published in 23 June 2015 on the IEEE Spectrum website. You can read this article at the following link:

The types of activities a humanoid robot might perform on a Mars mission are expected to become tasks to be demonstrated by each team choosing Track B in the SRC.

In the time between the DRC Finals and the SRC Level II competitions, I’m sure we’ll see substantial improvements in humanoid robot performance.

The international robotics community has turned out in force for the DARPA Robotics Challenge (DRC) Finals, a competition of robots and their human supervisors to be held June 5-6, 2015, at Fairplex in Pomona, Calif., outside of Los Angeles. In the competition, human-robot teams will be tested on capabilities that could enable them to provide assistance in future natural and man-made disasters. Fourteen new teams from Germany, Hong Kong, Italy, Japan, the People’s Republic of China, South Korea, and the United States qualified to join 11 previously announced teams. In total, 25 teams will now vie for a chance to win one of three cash prizes totaling $3.5 million at the DRC Finals. 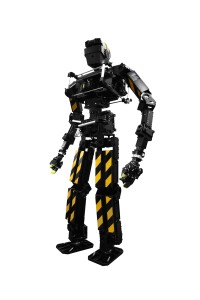 You can see photos of other competitors and read more about the challenge at the following links:

The Cylons are coming!