In my 6 August 2016 post, “Lunar Lander XCHALLENGE and Lunar XPrize are Paving the way for Commercial Lunar Missions,” I reported on the status of the Google Lunar XPrize, which was created in 2007 to “incentivize space entrepreneurs to create a new era of affordable access to the Moon and beyond,” and actually deliver payloads to the Moon.  In addition, the lunar payloads were tasked with moving 500 meters (1,640 feet) after landing and transmitting high-definition photos and video back to Earth. Any additional science data would be a plus.  In January 2018, after concluding that none of the remaining competitors could meet the extended 31 March 2018 deadline for landing on the Moon, the Google Lunar XPrize competition was cancelled, with the $30M in prizes remaining unclaimed. You can read this post here:

One of the competing Lunar XPrize teams was SpaceIL from Israel, which was developing a small lunar spacecraft named Beresheet (originally named Sparrow), that was designed to hitch a ride into an elliptical Earth orbit as a secondary payload on a SpaceX Falcon 9 commercial launch vehicle and then transfer itself to a lunar orbit and finally land on the Moon.

As completed by SpaceIL and Israel Aerospace Industries (IAI), the Beresheet spacecraft has a launch mass of 600 kg (1,323 pounds) and a landing mass of about 180 kg (397 pounds).  The lander carries imagers, a magnetometer, a laser retro-reflector array (LRA) provided by the U.S. National Aeronautics and Space Administration (NASA), and a time capsule of cultural and historical Israeli artifacts.

After landing on the Moon, the Beresheet spacecraft electronic systems are expected to remain operational only for a few days. The original Lunar XPrize plan to demonstrate mobility and move the spacecraft after landing on the Moon has been dropped.  The laser retro-reflectors will enable the spacecraft to serve as a fixed geographic reference point on the lunar surface long after the mission ends.While not designed for a long lunar surface mission, Beresheet is intended to demonstrate advances in technology that enable low-cost, privately-funded missions to another body in the solar system.  Beresheet was developed and constructed for about $100 million.  You’ll find more information on the Beresheet spacecraft here:

Beresheet was launched from Cape Canaveral, FL on 21 Feb 2019 into an initial elliptical Geosynchronous Transfer Orbit (GTO) that was dictated by the requirements for the Falcon 9 booster’s primary payload. Once in GTO, Beresheet used its small rocket engine to gradually raise its orbit to a 400,000 km (248,548 mile) apogee to intersect the Moon’s circular orbit, and phase its orbit so the spacecraft passed close to the Moon and could maneuver into a transfer orbit and be captured by the Moon’s gravity.  This mission profile is illustrated below.

You can watch a short video with an animation of this mission profile here:

On 4 April, SpaceIL tweeted: “Critical lunar orbit capture took place successfully. #Beresheet is now entering an elliptical course around the #moon, as we get closer to the historical landing #11.4″

After circularizing its lunar orbit, Beresheet is scheduled to land on the Moon on 11 April 2019.  NASA is providing communications support during the mission.

On 28 March, the X Prize founder and Executive Chairman Peter Diamand announced that, if the lunar landing is successful, the Foundation would award a $1 million “Moonshot Award” to Beresheet’s builders. Peter Diamand noted, “SpaceIL’s mission represents the democratization of space exploration.”

Best wishes to the SpaceIL team for a successful lunar landing.  If successful, Israel will become the 4thnation, after Russia (Soviet Union), USA and China to land spacecraft on the Moon.

The Beresheet spacecraft successfully initiated its descent from lunar orbit on 11 April 2019.  Initial telemetry indicated that the landing profile was proceeding as planned.

Communications with the spacecraft was lost when Beresheet was about 489 feet (149 meters) above the moon’s surface.  Opher Doron, the general manager of IAI, reported during the live broadcast, “We had a failure in the spacecraft; we unfortunately have not managed to land successfully.”

X Prize founder and Executive Chairman Peter Diamandis announced that SpaceIL and IAI will receive the $1 million Moonshot Award despite failing to make the planned soft landing on the Moon.

On 17 April 2019, SpaceIL announced that its preliminary failure analysis indicated that a software command uploaded to restart a failed inertial measuring unit (IMU) may have started a sequence of events that ultimately shut down the main engines prematurely during the landing attempt, resulting in the crash of the Beresheet spacecraft.

Morris Kahn, SpaceIL’s primary source of funding, pledged that the team will try again for a Moon landing with a new spacecraft dubbed “Beresheet 2.0,” which will incorporate lessons learned from the first lunar landing attempt.

For more information on the Beresheet mission, see The Planetary Society mission report at the following link:

There are two U.S. firms that have succeeded in launching and recovering a booster rocket that was designed to be reusable. These firms are Jeff Bezos’ Blue Origin and Elon Musk’s SpaceX.   Their booster rockets are designed for very different missions.

Both firms cite a cost advantage of recovering and reusing an expensive booster rocket and space capsule. Let’s see how they’re doing.

On 23 November 2015, Blue Origin made history when, on its first attempt, the New Shepard booster completed a suborbital flight that culminated with the autonomous landing of the booster rocket near the launch site in west Texas. The capsule landed nearby under parachutes. You can view a video of this historic flight at the following link:

This same New Shepard booster was launched again on 22 January 2016, completed the planned suborbital flight, and again made an autonomous safe landing. This flight marked the first reuse of a booster rocket.

Again using the same hardware, New Shepard was launched on its third flight and safely recovered on 2 April 2016. On this flight, the rocket engine was re-started at a lower altitude (3,635 feet, 1,107 m) than on the previous flights to demonstrate the fast startup of the engine. The booster rocket made an on-target landing, touching down at a velocity of 4.8 mph (7.7 kph). 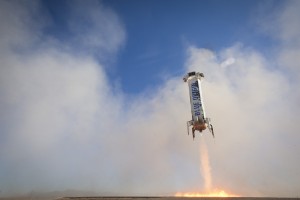 You can view a short video of the third New Shepard flight at the following link:

In this video, the view from the capsule at 64.6 miles (104 km) above the Earth is stunning. As the landing of the booster rocket approaches, it is dropping like a stone until the rocket engine powers up, quickly stops the descent, and brings the booster rocket in for an accurate, soft, vertical landing.

So, the current score for Blue Origin is 3 attempts and 3 successful soft, vertical landings in less than 5 months. The same New Shepard booster was used all three times (i.e., it has been reused twice).

Refer to the Blue Origin website at the following link for more information.

The basic flight profile for a two-stage Falcon 9 recoverable booster on an orbital mission is shown in the following diagram. For ISS re-supply missions, the target for the Dragon capsule is in a near-circular orbit at an altitude of about 250 miles (403 km) and an orbital velocity of about 17,136 mph (27,578 kph). The first stage shuts down and separates from the second stage at an altitude of about 62.1 miles (100 km) and a speed of about 4,600 mph (7,400 kph, Mach 7). These parameters are for illustrative purposes only and will vary as needed to meet the particular mission requirements. The second stage continues into orbit with a Dragon capsule or other payload.

The nine-engine first stage carries extra fuel to enable some of the booster rockets to re-start three times after stage separation to adjust trajectory, decelerate, and make a soft vertical landing on an autonomous recovery barge floating in the ocean 200 miles (320 km) or more downrange from the launch site.

The empty weight of the recoverable version of the Falcon 9 first stage (the F9R) is 56,438 pounds (25,600 kg,), which is about 5,511 pounds (2,500 kg) more than the basic, non-recoverable version (V1.1). The added fuel and structural weight to enable recovery of the first stage reduces the payload mass that can be delivered to orbit. 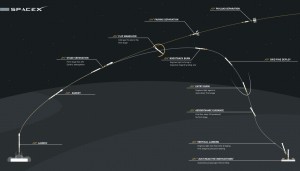 The autonomous “drone” barge is a very small target measuring about 170 ft. × 300 ft. (52 m × 91 m). It is equipped with azimuthal thrusters that provide precise positioning using GPS position data. The Falcon 9 booster knows where the drone barge should be. The Falcon 9’s four landing legs span 60 ft. (18 m), and all must land on the barge. 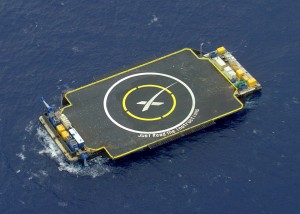 SpaceX made a series of unsuccessful attempts to land on a drone barge before their first successful landing:

On 8 April 2016, a Falcon 9 booster was launched from Cape Canaveral on an ISS re-supply mission. The first stage of this booster rocket became the first to make a successful landing on the drone barge downrange in the Atlantic. 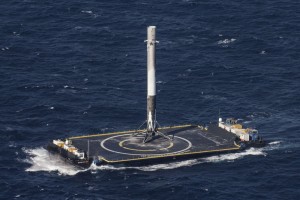 You can view a short video of the Falcon 9 booster landing on the drone barge at the following link:

In the video, you will note the barge heaving in the moderate seas. After landing, the 156 foot (47.5 m) tall booster rocket is just balanced on its landing legs. Before the barge can be towed back to port, crew must board the barge and secure the booster. This is done by placing “shoes” over the landing feet and welding the shoes to the deck of the barge. Once back at Cape Canaveral, the booster will be examined and the rocket engine will be test fired to determine if the first stage can be reused.

Previously, on 21 December 2015, SpaceX successfully launched its Falcon 9 booster on an orbital mission and then landed the first stage back on the ground at Cape Canaveral. As shown in the diagram below, this involved a very different flight profile than for a Falcon 9 flight with a landing on the downrange drone barge. For the December 2015 flight, the Falcon 9 first stage had to reverse direction to fly back to Cape Canaveral from about 59 miles (95 km) downrange and then decelerate and maneuver for a soft, vertical landing about 10 minutes after launch. 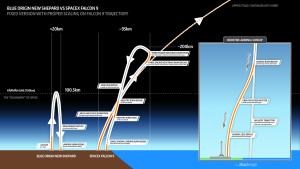 After recovering the booster, the Falcon 9 was inspected and the engines were successfully re-tested on 15 January 2016, on a launch pad at Cape Canaveral. I could not determine if this Falcon 9 first stage has been reused.

So, the current score for SpaceX is 6 attempts (not counting the February 2015 soft landing in the ocean) and 2 successes (one on land and one on the drone barge) in 15 months.

Refer to the SpaceX website at the following link for more information.

The New Shepard sub-orbital mission is much less challenging than any Falcon 9 orbital mission. Nonetheless, both booster rockets face very similar challenges as they approach the landing site to execute an autonomous, soft, vertical landing.

It remains to be seen if this technology actually delivers the operating cost savings anticipated by Blue Origin and SpaceX. I hope it does. When space tourism becomes a reality, the hoped-for cost benefits of reusable booster rockets and spacecraft could affect my ticket price.

On 6 March 2020, SpaceX launched its 20th commercial resupply services mission (CRS-20) to the International Space Station (ISS).  The successful launch concluded with the 50thsuccessful landing of the first stage of a Falcon 9 launch vehicle.  On this mission, the first stage flew back for a landing at Cape Canaveral in the windiest conditions encountered to date, 25 to 30 mph.  This was the last launch with the original cargo-only version of the Dragon capsule. Subsequent launches will use 2nd-generation Dragon capsules that are roomier and designed to also accommodate astronauts.

About two weeks later, on 18 March 2020, SpaceX launched another successful Falcon 9 mission, for the first time using a first stage that had flown on four prior missions.  The satellite payload was launched into the intended orbit.  However, a malfunction in one of nine first stage engines prevented recovery of the booster rocket.

On 11 December 2019, Blue Origin reported that New Shepard mission NS-12 was successfully completed.  “This was the 6th flight for this particular New Shepard vehicle. Blue Origin has so far reused two boosters five times each consecutively, so today marks a record with this booster completing its 6th flight to space and back.”