This post is an update and supplement to the information on floating nuclear power plants (FNPPs) in my July 2018 post, “Marine Nuclear Power: 1939 – 2018,” at the following link: https://lynceans.org/all-posts/marine-nuclear-power-1939-2018/

An FNPP is a transportable barge housing one or more nuclear power reactors that can deliver electric power and other services, such as low temperature process heat and/or desalinated water, to users at a wide variety of coastal or offshore sites. FNPPs are a zero-carbon energy solution that has particular value in remote locations where the lack of adequate electrical power and other basic services are factors limiting development and/or the quality of life.

After being manufactured in a shipyard, the completed FNPP is fueled, tested and then towed to the selected site, where a safe mooring provides the interfaces to connect to the local / regional electrical grid and other user facilities.

The US operated the first FNPP, Sturgis, in the Panama Canal from 1968 to 1975.  Sturgiswas equipped with a 45 MWt / 10 MWe Martin Marietta MH-1A pressurized water reactor (PWR) that was developed under the Army Nuclear Power Program.

Sturgis supplied electric power to the Panama Canal Zone grid, replacing the output of Gatun Hydroelectric Plant. This allowed more water from Gatun Lake to be available to fill canal locks, enabling 2,500 more ships per year to pass through the canal. After decommissioning, dismantling was finally completed in 2019.

It wasn’t until 2019 that another FNPP, Russia’s Akademik Lomonosov, supplied power to a terrestrial electricity grid, 44 years after Sturgis.  The Lomonosov is a one-of-a-kind, modern FNPP designed for operation in the Arctic.  With two KLT-40S PWRs, Lomonosov supplies up to 70 MWe of electric power to the isolated Chukotka regional power grid or up to 50 Gcal/h of low temperature process heat at reduced electrical output to users in the industrial city of Pevek, near the eastern end of Russia’s Northern Sea Route.

Lomonosov started providing electricity to the grid on 19 December 2019 and regular commercial operation began on 22 May 2020.

3. FNPPs under development by several nations

Several nations are developing new FNPP designs along with plans for their serial production for domestic and/or export sale.  The leading contenders are presented in the following chart.

Akademik Lomonosov and the first four new FNPP designs in the above chart use small PWRs in various compact configurations. PWRs have been the dominant type of power reactor worldwide since their introduction in naval reactors and commercial power reactors in the 1950s. The Seaborg power barges will use compact molten salt reactors (CMSRs) that have functional similarities to the Molten Salt Reactor Experiment (MSRE) that was tested in the US in the early 1960s.

Russia is developing their 2nd-generation “optimized floating power unit” (OPEB) to deliver 100 MWe electric power, low temperature process heat and water desalination to support their domestic economic development in the Arctic. In November 2020, Rosatom director for development and international business, Kirill Komarov, reported that there was demand for FNPPs along the entire length of Russia’s Northern Sea Route, where a large number of projects are being planned. This was reinforced in May 2021, when Russia’s President Vladimir Putin endorsed a plan to deploy OPEBs to supply a new power line at Cape Nagloynyn, Chaunskaya Bay, to support the development of the Baimskaya copper project in Chukotka.  The development plan calls for 350 MWe of new generation from nuclear or liquid natural gas (LNG) generators.  Baimskaya currently is supplied from Pevek, where the Lomonosov is based.

A version of the OPEB also is intended for international export and has been designed with the flexibility to operate in hot regions of the world.  Bellona reported that “Rosatom has long claimed that unspecified governments in North Africa, the Middle East and Southeast Asia are interested in acquiring floating nuclear plants.”

China included the development of CNNC’s 125 MWe ACP100S and CGN’s 65 MWe ACPR50S marine PWR plants in its 13th five-year plan for 2016 to 2020. The NDRC subsequently approved both marine reactor designs.

As an example of the magnitude of China’s domestic offshore market for FNPPs, the total installed fossil fuel-powered generation in China’s offshore Bohai oilfield was estimated to be about 1,000 MWe in 2020 and growing.  Replacing just these generators and providing heating and desalination services for offshore facilities represents a near-term market for a dozen or more FNPPs.  Other domestic application include providing these same services at remote coastal sites and offshore islands. China has announced its intention to construct a batch 20 FNPPs for domestic use. The Nuclear Power Institute of China (NPIC) has recommended installing the country’s first FNPP at a coastal site on the Yellow Sea near Yantai, Shandong Province. South Korea raised its objection to this siting plan in 2019.

Other possible FNPP deployment sites may include contested islands that China has begun developing the South China Sea.  This is a very sensitive political issue that may partially account for why there has been very little recent news on the CNNC and CGN FNPP programs.  Based on their development plans discussed about five years ago, it seemed that China’s first FNPP would be completed in the early 2020s.

In addition to their domestic applications, China has repeatedly expressed interest in selling their FNPPs to international customers.

In the absence of clear domestic FNPP markets in South Korea and Denmark, KEPCO E&C and Seaborg Technologies are focusing on the export market, primarily with developing nations.

You’ll find more details on these new FNPPs in my separate articles at the following links:

All of the new FNPPs require regular reactor refueling and periodic maintenance overhauls during their long service lives.  The periodic overhauls ensure that the marine vessel, the reactor systems and ship’s systems remain in good condition for their planned service life, which could be 60 or more years.

The FNPPs with PWRs have refueling intervals ranging from about 2 years (ACP100S) to as long as 10 years (RITM-200). Some of the PWR refuelings will be conducted dockside, while others will be conducted in a shipyard during a periodic maintenance overhaul. For Russian FNPPs, such overhauls (referred to as “factory repairs”) are scheduled to occur at 12-year intervals for the Lomonosov and 20-year intervals for the OPEB.

The fundamentally different Seaborg CMSR, with molten salt fuel, is refueled regularly while the reactor is operating.  Periodic maintenance overhauls would still be expected to ensure the condition of the marine vessel, the reactor systems and ship’s systems.

With a fleet of FNPPs in service, most will be operating, while some are in the shipyard for their periodic maintenance overhauls.  In addition, new FNPPs would be entering service periodically. When it is time to service an FNPP in a shipyard, it will be replaced by a different (existing or new) FNPP that is brought in to take its place.

At the end of its service life, an FNPP will be returned to a shipyard to be decommissioned, decontaminated and then dismantled, like Sturgis. Russia already has established special long-term spent fuel and radioactive waste storage facilities in mainland Russia. China, South Korea and Denmark will need to make similar provisions for the end-of-life processing and safe disposition of their retired FNPPs.

In March 2019, Jim Green wrote on what he called “the questionable economics of SMRs” in his article, “An obituary for small modular reactors.” One of his conclusions was that, “…in truth there is no market for SMRs.”  Another conclusion was that “No-one wants to pay for SMRs. No company, utility, consortium or national government is seriously considering building the massive supply chain that is at the very essence of the concept of SMRs ‒ mass, modular factory construction. Yet without that supply chain, SMRs will be expensive curiosities.”

I might agree that this could be the case for land-based SMRs, but marine FNPPs are a different matter.  In remote areas being considered for FNPP deployment, there probably are fewer energy options, energy price competition is a lesser concern, and an extended fuel supply chain is undesirable or impractical. Examples include FNPP applications supporting resource development along Russia’s Northern Sea Route and in China’s offshore waters.  The domestic markets in both nations probably can support production runs of 10s of FNPPs.  While this isn’t “mass production” in the sense of many heavy industries, it would certainly be a big enough production run to change the manufacturing paradigm in the marine nuclear industry and provide a real validation of the economics of SMRs.

Deployment of the first modern FNPP, the Akademik Lomonosov, in the Arctic was accomplished under Russian domestic nuclear laws and regulations and, after the reactors were fueled, the transit to its destination was accomplished within Russian territorial waters. The final destination, Pevek, is about 980 km (609 miles) from the Bering Strait and the nearest international boundary.  Not without controversy, particularly among Scandinavian nations, Lomonosov’s deployment was straightforward after the vessel completed all stages of licensing and regulatory reviews required in Russia.  Now Lomonosov has been commissioned and is setting an example for the rest of the world by operating successfully in a remote Arctic port.

In her August 2020 article, “Legal framework for nuclear ships,” Iris Bjelica Vlajić reports that the main international documents regulating the use of civil nuclear ships are:

Further FNPP deployment along Russia’s arctic coast and initial FNPP deployment in China’s territorial coastal waters can be accomplished under the respective nation’s domestic nuclear laws and regulations.  It’s easy to imagine that a range of international issues will arise as FNPP deployment becomes more widespread, in situations like the following

There has been speculation recently that the sensitivity of the last issue, above, may be contributing to increased secrecy in the last couple of years related to China’s FNPP programs.

As FNPP deployment expands, the international community will be playing catch-up as the UN, IMO, IAEA and others contribute to developing a modern nuclear regulatory and legal framework for FNPPs.

In the next decade, I think it’s very likely that two or more of the new FNPP designs will enter service.  The leading contenders seem to be Russia’s OPEB and China’s ACP100S FNPP.   It remains to be seen if economic issues and/or international nuclear regulatory / legal / political issues will stand in the way of eventual FNPP deployments to sites around the world.

Other FNPP designs and concepts for “transportable reactor units” (only the nuclear steam supply section of an FNPP) and seabed-sited nuclear power plants are included in my 2018 post: “Marine Nuclear Power: 1939 – 2018:” https://lynceans.org/all-posts/marine-nuclear-power-1939-2018/ 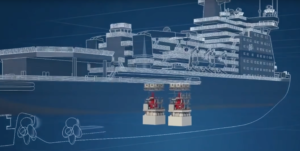 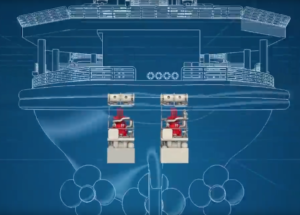 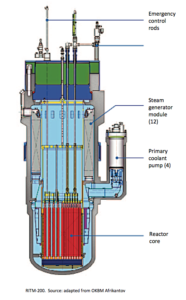 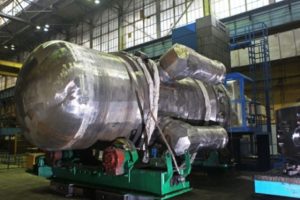 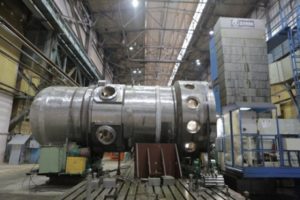 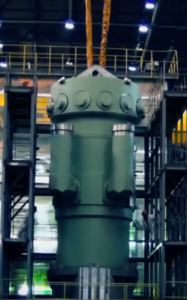